This is our second post in our history series and is written by Doc himself. This post introduces the namesake of Mary’s Flat, a favorite fishing spot among our guests.

Mary is one of our four favorite living daughters (we only have 4!). During the early years at the lodge Mary and her husband, Kelly, were an integral part of the development of Doc Warner’s. They spent many long hours working for both the benefit of our guests and the development of our business.

During our camping days our oldest daughter, Lisa, landed a halibut weighing over 100 pounds. Needless to say, she was the envy of her other three sisters. Mary had fished often but the big fish always seemed to evade her best efforts. 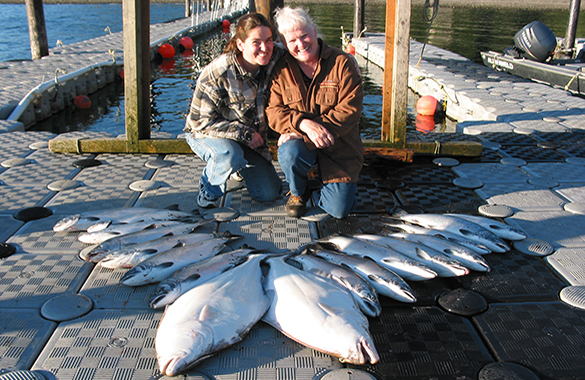 One year, on the day before Mary’s birthday in mid-June, she came to me and said she had a special request for a birthday present. Mary wanted to catch a halibut weighing over 100 pounds, thereby sharing bragging rights with Lisa. I offered to take her fishing all day on her birthday – it was the best I could offer. Catching a 100+ pound halibut is rare enough that we celebrate the success of those lucky anglers at the lodge.

As promised, we went fishing on Mary’s birthday. As we passed Point Adolphus and rounded the bend at Eagle Rock, we were in new territory. The first thing I noticed was how calm the water was. As I searched my marine chart, I saw that there was a large underwater plateau stretching almost a mile near Eagle Rock into Mud Bay. We cruised the area slowly, watching the fish-finder to observe the depth and bottom contour. It was a day without big tides so we had time to look carefully. Finally, we found a spot that seemed ideal: smooth on bottom, near the top of a gentle underwater ridge, and within the depth range we preferred.

We anchored and then each put a line down. Within a few minutes the fish seemed to sense that it was Mary’s birthday. Her pole tip lunged toward the water, the reel screeched as the line ripped off the spool. I offered my assistance, but Mary quickly informed me that she didn’t need any help; this was her fish. After a diligent fight, the fish gave up and Mary landed a 115 pound halibut. Since the limit was two fish per day, and we still had plenty of fishing time left in the day, Mary put down her line again. She relaxed just enough to let her tired muscles regain some strength when the pole tip began to bob. It must be a little one she remarked and picked up her pole to set the hook. Mary pulled up and the fish really pulled back – for a minute she thought she was on the wrong end of a catapult! Forget about tired muscles, this was a fight for the championship among sisters. It wasn’t long before the big fish realized it had met its match and more. In the end, Mary landed the 155 pound halibut. We dubbed the area “Mary’s Flats” and happily returned home with the birthday present successfully obtained.