Sometime during 1981, an Explorer Scout leader, Richard, phoned me* from Utah.  He wanted to bring his scouts on an Alaska high adventure fishing camp-out. At the time, I was working for the Alaska Department of Fish and Game.  I told Richard that if he would bring the boys to Juneau, I would help arrange for the necessary equipment and suggest a place they could fish from shore, since neither they nor we had boats.

We arranged transportation for them to travel to the end of the road north of Juneau to Echo Cove.  During the month of July when they would be at Echo Cove, a large school of pink salmon were typically in the cove preparing to move into the streams to spawn.  It would be easy fishing from shore. 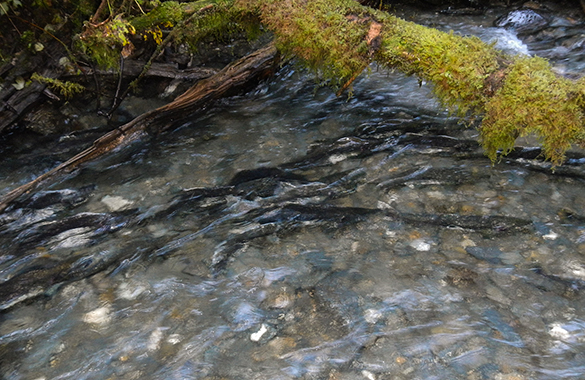 So the scouts came. After a couple of days fishing, the most adventurous scouts hiked up the beach along Berners Bay looking for stream fishing opportunities.  They discovered a stream with pink and chum salmon so thick they felt like they could almost walk across the stream on fish backs. They quickly took their limits of fish and put them into the large bags they had brought with them.  It didn’t take long before they realized their miscalculation.  The hike back to camp was several miles. Six big chum salmon could weigh over 50 pounds and six pink salmon could add another 10-20 pounds to their bags.  With sore shoulders, tired bodies and aching feet, they finally arrived back at camp.  They resolved that in the future they would do more ‘catching-and-releasing’ when fishing streams.

The last day of their trip, we arranged for some local Juneau residents to take them halibut fishing on the east side of Shelter Island.  One of the young men landed a 110 pound halibut!  It capped a great week for the Scouts and had an even more lasting effect on our lives.  That winter, Richard called again and wanted to bring three friends fishing and asked if I would help with logistics.  Richard continued coming every year, bringing various sizes of groups and every year we hosted them.  The meager beginnings of our little “charity operation” eventually became a real business named Doc Warner’s.